The Future for the Next Generation: Involuntary Servitude 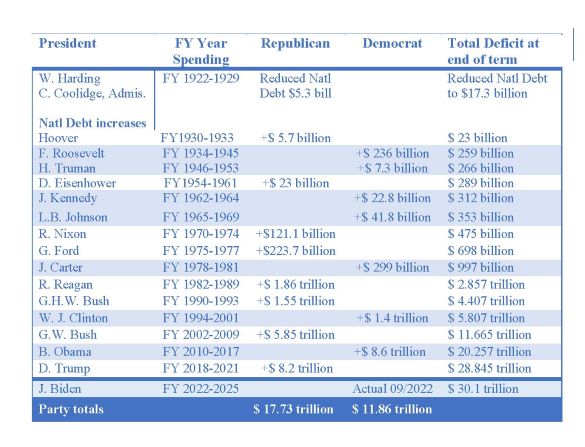 Under our Constitution, the people are the sovereign. We the people then hire the federal government to run the nation for our benefit. But like the Sci-fi movies where robots take over humans, the federal government is constantly expanding its powers to be our master and we, its servants. Both political parties increase their power over us by increasing the national debt. As the debt grows it becomes more unmanageable; eventually resulting in chaos that provides the federal government with the opportunity to fully realize its dream of placing citizens into involuntary servitude to serve its needs.

The United States is 246 years old. The last president to return money to the treasury was Calvin Coolidge. Our last six presidents in their forty-two combined years in office, have, on top of appropriations, borrowed, an additional, $27.46 trillion to run the nation. That is 88% of our entire $31 trillion national debt. Each taxpayer’s share of the national debt is $245,191 as of September 22, 2022. It is rising daily. The average personal income in the U.S. is $63,211.

Is our federal government incompetent, or insane or is there a more sinister agenda? Since most of the government is occupied by power-hungry people, its goal is to gain greater control over citizens. The easiest way to achieve greater control is through massive debt. It allows the government to give us what we don’t need, in exchange for taxing future generations. Eventually, it will require confiscatory taxes on citizens to pay off its debt. At that time the journey into involuntary servitude begins.

http://offsecnewbie.com/2019/07/26/update/ How did the government put us in this position?

Republicans and Democrats are both responsible for the National Debt. Actually, Republicans, for all their righteous calls for fiscal restraint, are responsible for 60% of it. The chart in the image uses data from The American Presidency Project, The Balance, and the Treasury Department to illustrate the increase in the national debt for each president by the fiscal year.

It is unlikely the national debt will be paid off in our lifetimes. This means we are living on the future productivity of those who have no say in creating it.  A truly unjust law to those who will have to pay tomorrow, for our spending today.

The national debt will become so burdensome to future generations that it will undermine democracy. If the federal government taxed current citizens the full amount of the programs it funds, there would be a tax revolt against “unjust taxes.” But the accumulation of massive debt is different from imposing taxes on people. Our representatives avoid accountability and confrontation by shifting the cost of today’s government to future generations.

Each dollar expended by us today without earning that dollar is a dollar our posterity will have to repay for us. Is there a point at which the debt imposed on future generations is so massive that it converts the social obligation of paying reasonable taxes into involuntary servitude to the government?

What is involuntary servitude?

“Involuntary servitude” is defined as “a condition of compulsory service or labor performed by one person, against his will, for the benefit of another person due to force, threats, intimidation or other similar means of coercion and compulsion directed against him.” It is usually found in situations where the servitor is compelled to labor against his will in the liquidation of some debt or obligation.

The International Labor Organization Forced Labor Convention of 1930 deems all involuntary work or service exacted under the threat of a penalty, to be forced labor, therefore, illegal. Under the Convention government-forced or compulsory labor does not include compulsory military service, civic obligations for the benefit of the community, punishment for a crime, and emergency situations such as helping with catastrophes.

Involuntary servitude is implemented by force

The federal government will have to impose unreasonably high taxes on future generations if it is to pay off the national debt. Anyone who does not pay will be threatened by the Internal Revenue Service (“IRS”) with a fine, confiscation of property, salaries, bank accounts, or imprisonment.

In the so-called “Inflation Reduction Act,” Congress authorizes an additional $79.6 billion for the IRS. $45.6 billion of this money is for enforcing the payment of taxes. The IRS will hire more enforcement agents, and lawyers, and purchase new technology and weapons to increase enforcement efforts.

Placing the situation in perspective is essential to understanding the federal government’s intentions. It is estimated the IRS will hire an estimated 87,000 new agents. This more than doubles its current workforce of 78,661. With its 165,661 federal agents, the IRS will be the fifth largest federal agency by the number of employees.

These new employees are in addition to the 2,300 Special Agents that carry AR-15s, P90 tactical rifles, and other heavy weaponry. According to OpenTheBooks, the IRS currently has 4,600 weapons and 5 million rounds of ammunition. Moreover, the IRS will have significant fire-power backup, should it need it. The Militarization of the U.S. Executive Agencies, prepared by OpenTheBooks, reports that 103 executive agencies, outside of the Department of Defense, spent $2.7 billion on guns, ammunition, and military-style equipment between the fiscal years 2006 and 2019. It estimates there are more federal police officers (200,000) with firearms than U.S. Marines (186,000), and this is before the IRS adds its new enforcement agents.

President Biden routinely talks tough and mocks anyone (from domestic extremists to parents speaking at school board meetings) believing they could challenge the power of the U.S. government. He noted if they [citizens] planned to use guns, they would “…need F-15s and maybe some nuclear weapons.”

If future citizens object to paying off a massive debt they had no part in creating, the federal government will use all the civil and criminal laws against them. It will overwhelm any person that challenges its “God-given right” to take any property for whatever the government believes is owed. These citizens will be forced to work no matter what the tax burden might be, to pay off the national debt.

Paying off a reasonable national debt is a civic duty. Working endlessly, under government threat, for a lifetime to pay off tens of trillions of dollars of debt that these future generations had no part in creating, is involuntary servitude which is prohibited by the XIII Amendment to the Constitution.

What can citizens do?

Citizens today cannot claim there is nothing we can do since the government controls the spending and increases in the national debt. Citizens in a democracy are responsible for the actions of the state. We need to treat government officials as our servants. Citizens have the ability through our vote to control them.  If we continue to allow the government to amass debt, we are telling future generations “they have no rights. All wealth belongs to the government.” At this point, the U.S. becomes an unjust nation that imposes involuntary servitude on posterity. If it continues, it is the end of our Democracy.

William L. Kovacs, author of Reform the Kakistocracy, recipient of the 2021 Independent Press Award for Political/Social Change. He also served as senior vice president for the U.S. Chamber of Commerce and a chief counsel to a congressional committee