Opponents of Section 230 Can Reform It Without Congress 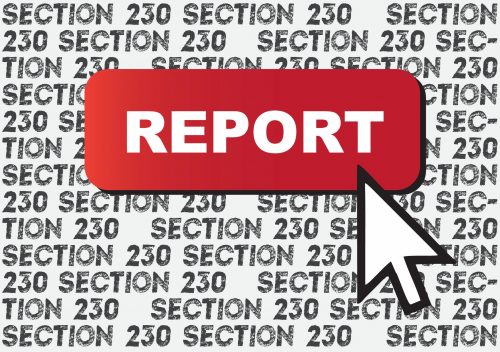 Critics of section 230 of the Communications Decency Act (“sec. 230”) have discussed reforming it for a decade. Section 230 has two primary provisions. The first exempts internet providers from civil liability for publishing any information from a third-party content provider that is objectionable. The second provision exempts Big Tech from liability when it takes voluntary, good faith actions, to restrict objectionable materials or provides the technical means to restrict them.

Unfortunately, like most politicians, sec. 230 opponents talk and talk. Watch and listen to Senators Cruz and Hawley on cable news. While their talk is full of sound and fury, it really signifies the proverbial nothing. Other conservatives introduce antitrust legislation to break up Big Tech, an endless effort for Congress and the courts. A few opponents just want to repeal sec 230, an incomprehensive statute designed to protect children from online predators but used to protect Big Tech.

Republicans controlled Congress and the White House until 2021 and did nothing to address sec. 230. Now, however, with significant help from Big Tech, especially with campaign contributions and the selective use of algorisms, Democrats gained control of Congress and the White House in 2021. As a result, Democrats will protect Big Tech, as long as it bans conservatives from its platforms. Being free of liability has allowed Big Tech to grow in size and wealth while achieving regulatory control over social media. Big Tech is so powerful, it even banned a sitting President from Facebook and Twitter. In addition, Google and Apple blocked Parler’s App from their stores, and Amazon Web Services suspended Parler’s access to its cloud network, thereby shutting it down for months.

Unless conservatives take innovative, concerted action outside of Congress, Big Tech will remain free to ban conservative voices from social media as long as Democrats hold the White House. It is now time for conservatives to take action or get off the pot.

Fortunately, there are many actions that can be taken with the drama of an inept Congress.

These principles are set out in Carter v. Carter Coal Company, (1935) and  Marsh v. Alabama, (1946). Since the First Amendment severely limits governments’ power to regulate political speech, the government cannot grant private parties, functioning as a government, more power than it has. If Congress desires to impose speech limitations on the Internet, it must do so directly, by government regulation that protects the constitutional rights of citizens.

Opponents of sec. 230 can take several actions to achieve reform.

how to by Misoprostol online Action 1: file a lawsuit asserting sec. 230 is an unconstitutional delegation of congressional authority. Perhaps the newly formed America First Legal will take on the issue. Free speech is just as important as illegal immigration.

buy Pregabalin india Action 2: Join Florida in its attempt to restrain the power of Big Tech. Governor DeSantis (R-FL) proposed and had passed a law prohibiting Big Tech from de-platforming the speech of political candidates and imposed fines on violators as high as $250,000 a day. Florida also allows citizens to sue companies violating the law. However, the penalties will not impact Big Tech’s actions. A few weeks ago, Google, with a market capitalization over $1 trillion, settled an antitrust case with French authorities for $270 million, a fraction of a percent of its worth. These individual attempts to control the power of Big Tech will be of limited success against the five largest tech giants having a value of $ 5.2 trillion. The state of Florida’s budget is $101.5 billion. The 2021 combined budget for all fifty states is $2.1trillion. Additionally, Big Tech is challenging the constitutionality of Florida’s law.

Rajaori Action 3: to break Big Tech’s stranglehold on free speech in social media, conservative groups could craft and implement an advocacy plan to restrict the application of sec. 230 without passing a new law. The model for this effort is the radical Left’s brilliant strategy to regulate climate change without passing any new law.

To seriously challenge Big Tech, conservatives will need to develop and implement a coordinated and aggressive strategy that includes legislators, governors, attorneys general, interest groups, legal centers, and citizens who want freedom of speech in the public square.

A similar strategy worked for the radical Left when it developed, coordinated, and implemented its plan to impose climate change regulation on the U.S. without Congress passing a climate change law. The strategy’s components:

If conservatives are serious about reforming section 230, they have all the tools for success: 27 Republican governors, 25 Republican Attorneys General, and certainly the numerous groups believing in free speech. Recently, twenty-five red states independently opted out of accepting extra federal unemployment benefits. These actions demonstrate a significant base of potential support. The key to success rests in the conservative’s willingness to plan, organize and implement like the Left.

Message to conservatives: If sec. 230 is truly the concern you make it to be; it’s time for the talking to stop and the action to start.