A Republican House Alone Can Reverse the Authoritarian State 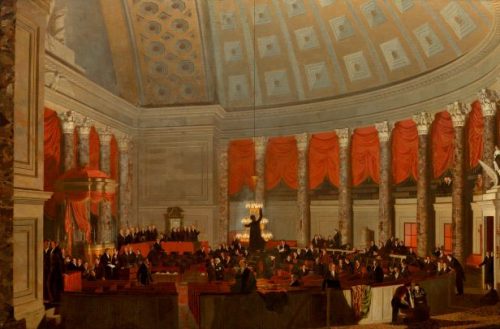 Freedom-loving people may believe the U.S. is at the edge of darkness with Biden’s 76 Executive Orders, 46 Presidential Memoranda, and 176 Presidential Proclamations that take the form of conflicting vaccines mandates, bans on energy supplies, open borders, union organizing rules, the teaching of critical race theory, and frenzied proposals on climate change to name but a few. In the last several weeks, The Washington Post published at least four articles ( 1, 2, 3, 4), telling us “…the nation is closer to civil war than any of us would like to believe.” The narrative running through the articles is that the January 6, 2021 riot was an “insurrection” by Trump’s unarmed followers to destroy Democracy.

The Progressive press is pushing its “coming civil war narrative” so hard it seems as if it wants to incite civil war so its leftist government can use the military to violently crush the assembly of objectionable, unarmed, ordinary Americans. It would also give justification to the Department of Justice and FBI to implement their threats against parents who speak out at school board meetings. It’s hard to believe that parents protecting their children are deemed to be “domestic terrorists” by any government, yet alone a U.S. government.

While the Democrats may hysterically claim the Republicans are trying to assassinate Democracy, they cannot hide their real angst over the fact that our Constitution allows us ordinary citizens, to elect the entire House of Representatives every other year. The Left may want a civil war, but patriotic Americans can win a revolution with their votes in November.

Democrats act out of fear of what voters might do on November 8, 2022. Yes, a Republican majority in the 2023 House of Representatives can restrain Biden’s authoritarianism. That’s the easy lifting. The House also has the constitutional power to do far more to reign in an authoritarian state, even if Republicans do not regain control of the Senate.

In simple terms, the real power the original Constitution gives citizens is the right to elect the House of Representatives every two years. That constitutional right is the power to change the direction of government before any administration can cement authoritarian rule. Voting for the House is the power of revolutionary change.

While the original Constitution had state legislatures electing Senators, and presidential electors, the people, have always directly elected the House of Representatives. Our Constitution has always empowered citizens with the full power to control the federal government by electing representatives wanting to limit government’s power over its citizens.

One may ask how is such power possible when laws must be passed by the House and Senate and signed by the President? There is an unstated and rarely used power that allows a majority of just one House of Congress to control the nation’s budget and the size of government. All a Republican House needs to do is refuse appropriate money to run the authoritarian state. Think of such power as a Congressional veto over crazy spendthrifts. Using such power allows one party, controlling just one House of Congress, to restructure the entire federal government by refusing to squander taxpayer money.

http://ttagsystems.com/wp-content/plugins/wp-user-extra-fields/js/wpuef-configurator.js How would this process work?

Under our Constitution, “No Money shall be drawn from the Treasury, but in Consequence of Appropriations made by Law.” This power can authorize more spending or be used to reduce spending and the national debt.

For Congress to spend more of the taxpayer’s money, it must appropriate the new money by enacting a law that requires the approval of both Houses of Congress and a Presidential signature. To spend less money or to spend no money; however, one House of Congress merely needs to do nothing. No provision in the Constitution gives the power to anyone to force Congress to spend money. Moreover, as an institution, Congress is the only branch of government that controls the nation’s purse, and one House of Congress can shut the purse.

Under Article I, section 7, of the Constitution, all bills for raising revenue must originate in the House of Representatives. By electing a majority of the House who support smaller government, the House has the sole power to block the enactment of new revenue streams to support a bigger government.

It is clear that no matter how big or powerful the federal government has become, a party that controls the House of Representatives can reign it in if it has to courage to do so. Republicans talk about smaller government, but the government has continuously expanded. They talk about reducing the national debt, but Republicans have increased the national debt more than the Democrats for the last several decades.

If Republicans take control of the House in 2023, it will be their “put up or shut up” moment. Only time will tell if the government remains wildly out of control or the Republican House of Representatives “puts up” to Save Democracy?