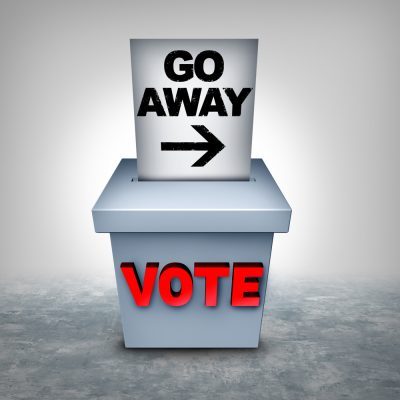 It is highly likely that politicians will screw up the 2020 presidential election. Republicans want us to vote early (by mail) and often (in-person). Democrats want to mindlessly flood the U.S. with blank ballots that can be completed by anyone. Both sides believe chaos works to their advantage.

Nothing can be further from the truth! Voting is too important to be determined by politicians.

Voting is for citizens to choose fellow citizens to operate their government for the sole benefit of citizens. Voting is the only tool a citizen has to control a government with massive powers that can be used against us.

In the 2020 elections, officials may be unable to count all the mail-in ballots before the electoral college voting deadline of December 14, 2020. Lawsuits will challenge millions of ballots for every minor deviation, e.g. smudges, signatures looking different than ten ago when one registered. These challenges will all be in the name of a “fair election.”

Perhaps Democrats believe Biden can be selected president by the 2021 House of Representatives. The Republicans may believe a repeat of 2000 elects Trump, since only the nine members of the U.S. Supreme Court vote. Whoever is selected, elected or ordered to be president will be perceived illegitimate by at least half the country. Worse, citizens’ belief in the integrity of the voting process will be destroyed. Such harm will rot the nation!

Natitingou A brief history of voting places its importance in perspective

The right of citizens to vote is merely a cryptic mention in the text of the Constitution, requiring the House of Representatives “…be chosen every second year by the people of the several States.” Initially, citizens did not vote for Senators; they were elected by state legislatures. Citizens still do not vote for the president, that is the job of the electors selected by state legislatures. Judges were never elected; they are political appointees.

Initially, only white men with a certain amount of property could vote. Beginning in the 1820s property requirements began to recede for all white men, including white immigrants. After the Civil War, the 13th, 14th, and 15th Amendments to the Constitution abolished slavery and guaranteed citizenship to all born or naturalized citizens.

These rights were short-lived in that after the election mess of 1876 (Tilden v. Hayes), Democrats traded the presidency away for the removal of northern troops in the South, thereby disenfranchising free blacks through poll taxes, literacy tests, Jim Crow laws, Black Codes and military-style hate armies such as the White League, Red Shirts, and the KKK.

In the 1960s, with the enactment of new Civil Rights laws, many of the restrictions on black voting were made illegal. Eventually, with the draft and the war raging in Viet Nam, the 26th Amendment to the Constitution was ratified giving citizens 18 to 21 years of age the right to vote. The chant at the time was “Old enough to fight, old enough to vote.”  In 1986 citizens living overseas on military bases were given the right to vote.

The struggle to secure the right to vote continues today over access to polling stations, long lines and limited hours to vote, the security of mail-in ballots, voter identification, accommodations for the disabled, seniors, the homeless, felons, and for minorities, especially in poorer communities.

Polls tell us 71% of likely voters believe the U.S. is on the wrong track. Yet, in 2016 only 139 million citizens out of 250 million citizens of voting age, a 55.7% turnout. That means 111 million eligible voters did not care enough about what the government is doing to vote. The low percentage turnout shows disrespect to all who fought over the centuries to secure for us, the right to vote. These non-voters are invisible citizens at a time when every citizen must be counted.

To all eligible voters – be relevant – Vote in the 2020 election. Minimize the tendency of government to screw up the election by taking time to follow the directions, if voting by mail, and vote as early as you can to take the stress of the system. Urge your neighbors to vote. Be a poll watcher. Citizens, always keep in mind – if you do not vote for the government you want, politicians will impose on us what they want.