Comparing Leaders in Ukraine, the U.S. and Canada 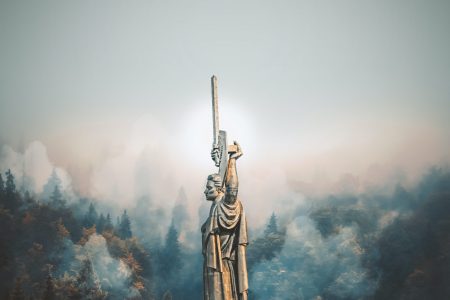 The outcome of Russia’s invasion of Ukraine is far from certain. However, what is certain is that Ukraine is fortunate it is not led by the type of leaders present in the United States and Canada. This comparison is best told by a series of interviews that illustrate the starkness of the different leaders and “leaders.”

The first comparison is Kira Rudik, a Ukrainian Parliamentarian, and Alexandra Ocasio Cortez, (“AOC”) a member of Congress. The second comparison is between Volodymyr Zelenskyy, the president of Ukraine, and Joe Biden, president of the United States and Justin Trudeau, prime minister of Canada.

Kira Rudik, was awakened at 5 AM by the Russian bombing of Kyiv on the morning of February 24, 2022. She took her family to a bomb shelter but left at 9 a.m. to attend a meeting of the Parliament to vote on imposing Marshall Law to protect citizens. After the vote, she went to the Army’s warehouse where she picked up a Kalashnikov automatic rifle to defend her country.

Later in the day she was interviewed and asked about being on the Russian’s “hanging list.” She acknowledged the Russians wanted to hang her, president Zelenskyy and other parliamentarians on the same street. She noted in the interview, however, she had to show support for the Ukrainian army and people. “Leaders must show people how to act. I am not going anywhere; I am self-armed.”

Compare Kira Rudik’s bravery to AOC hiding, barricaded in her bathroom, during the January 6, 2021 riot at the U.S. Capitol. Several facts are solid based on the numerous interviews of AOC and others observing AOC during the riots. AOC was not at the Capitol during the riots. She was in a House of Representatives Office Building which is about a third of a mile away.

After AOC gave many AOC interviews of her “near-death experience,” in her barricaded bathroom, Representative Katie Porter, revealed”

“…that during the riot, Ocasio-Cortez walked into her office, didn’t stop to speak to her, and just began opening cabinet doors.

‘I was like, ‘Can I help you?’ Like, ‘What are you looking for?’” Porter shared during an MSNBC appearance.

‘I’m looking for where I am going to hide,’” Ocasio-Cortez reportedly responded.

Porter said she tried to calm AOC down, saying that she was a mom and had plenty of supplies in the office to sustain them.

She said, ‘I just hope I get to be a mom. I hope I don’t die today,’” according to Porter, who works next door to Ocasio-Cortez…

Prior to AOC’s “fear of death,” from a protest, she was very outspoken about the need for protests on Twitter.  AOC emphasized “The whole point of protesting is the make ppl uncomfortable… To folks who complain protests demands make others uncomfortable…that’s the point.”

The rioters were never her Office Building. AOC was never under threat.  No one should ever assume AOC will defend the United States. She is doing all she can to destroy it.

Now turn to the big guys, presidents, and a prime minister.

Ukraine’s president Zelenskyy stayed in Ukraine to lead the resistance, knowing if he was captured, he would be the first to be hanged by the Russians; his family would be second. Bravely, he told the nation by video, he would not leave, he would stay to defend the nation.

The United States offered to extract Zelenskyy from Kyiv, but he immediately refused to leave, stating: “The fight is here. I need ammunition, not a ride.”

Now to examine how the “big” leaders in Canada and the U.S. act under pressure.

During the recent truckers’ peaceful protest in Ottawa, Canada, trying to find Prime Minister Trudeau was as difficult as finding “Waldo.” The truckers’ protest is summed up by Harold Jonker who told BBC, “We want to be free, we want to have our choice again, and we want hope – and the government has taken that away.” Trudeau, surrounded by his security detail, “bravely” taunted the truckers characterizing their rhetoric as hateful, violent, and disrespectful. He also called them racists and fascists; however, he chose not to go anywhere near the protests. As the protests gained momentum, Trudeau and his family fled Parliament Hill for an undisclosed, secure, location, where he felt safe.

As for the U.S. president, in his first year in office, he constantly moves around so the public does not observe how incapable he is of leading the nation. He spent 73 days at his home in Delaware, another 16 days at his beach house, and 37 days at Camp David. And, when in DC he does not use the White House for meetings. He uses a digital view of the Rose Garden so he can read from a teleprompter as a way to have the public believe he knows what he is doing. He has been ridiculed for using a  “literal game show set” as president. Jack Posobiec, a commentator called it the “Truman Show Presidency,” adding that “they gave Joe Biden a playschool desk and a fake Oval Office in a fake White House.”

This is the same Joe Biden who “spent months of his presidential campaign safely ensconced in his basement, communicating to the country via a television camera. His convention speech was delivered to a near-empty room in Delaware.”

President Biden will never be caught off-guard by protesters or an angry mob. He will not be found at the White House. Joe Biden doesn’t really live there anymore; he is a virtual president.

muzzily Leadership is about working with people to achieve results. One of the key traits of leadership is courage which allows leaders to step up at a critical moment to move a situation in the right direction. When these critical moments arrived, the “leaders” of the U.S. and Canada lacked the courage to undertake or endure situations they believed dangerous. That is cowardice. One barricaded herself in a bathroom hoping to be invisible. One used a fake setting to appear presidential and absented himself from a presidential campaign and the White House to hide his inability to lead the American people.  One took the proverbial ride to safety.

Contrast North American “leadership” to the actions of President Zelenskyy and the parliamentarian Kira Rudik. President Zelenskyy stepped up at the moment of peril, told the world he needed “ammunition, not a ride.” He stayed and led his nation in a fight against Russian invaders. Kira Rudik, after fulfilling her obligations to her family and parliament, went to the warehouse and picked up her automatic rifle to join the resistance. These actions are defined as courage – the moral strength to persevere and withstand danger, fear, or difficulty.

Wake up America and Canada, virtual leaders are not useful in a dangerous world.