Can Voting Really Change the Country? 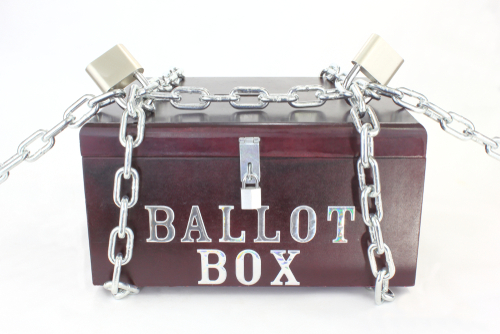 It is highly likely that our “exalted candidates” for president will screw up the 2020 election.

Republicans want us to vote early (by mail) and often (in-person). They sue states allowing for extra time to count mail-in ballots so they can limit the votes counted.  Democrats want to mindlessly flood the U.S. with tens of millions of blank ballots that can be completed by anyone. Still being followed is the “sage advice”  of long-time Chicago mayor William Hale Thompson, “vote early and often.” Both sides believe chaos works to their advantage.

The chaos theory, the randomness of a chaotic system produces underlying patterns that self-organize, does not work in politics. All it produces is chaos. The chaos produces doubt in democracy. A recent Yahoo poll finds only 22% of Americans think the 2020 presidential election will be “free and fair.”

The monopoly control of voters by the two major parties has given us big government, low taxes for the wealthy, massive wealth inequality, corporate welfare, building bigger and bigger war machines, and now such polarization that whoever wins the next election will be considered illegitimate by half the electorate.

Voters who do not wear R or D letters around their necks are told not to waste their vote on a Libertarian, Green, Constitution, or any other minor party since they can’t win. Accepting this thinking means living, in perpetuity, in a kakistocracy, rule by least able or least principled citizens.

We can do better. Voting is a tool that allows for a peaceful revolution!  Too many people believe voting does not change the policy of the nation. Quoting Lawrence of Arabia, “Nothing is written.” If a ragtag army can overthrow King George, overthrowing the Ds and Rs controlling the kakistocracy is possible. But first people have to vote.

http://inkimages.net/product-tag/shirt/ A brief history of voting places its importance in perspective

The right of citizens to vote is merely a cryptic mention in the text of the Constitution, requiring the House of Representatives “…be chosen every second year by the people of the several States.” Initially, citizens did not vote for Senators; they were elected by state legislatures. Citizens still do not vote for the president—that is the job of the electors, whose vote is determined by state legislatures. Judges were never elected. They are political appointees.

Initially, only white men with a certain amount of property could vote. Beginning in the 1820s, property requirements began to recede for all white men, including white immigrants. After the Civil War, the 13th, 14th, and 15th Amendments to the Constitution abolished slavery and guaranteed citizenship to all born or naturalized citizens.

These rights were short-lived in that after the election mess of 1876 (Tilden v. Hayes). Democrats traded the presidency away for the removal of northern troops in the South, thereby disenfranchising free blacks through poll taxes, literacy tests, Jim Crow laws, Black Codes, and military-style hate armies such as the White League, Red Shirts, and the KKK.

In the 1960s, with the enactment of new Civil Rights laws, many of the restrictions on black voting were made illegal. Eventually, with the draft and the war raging in Viet Nam, the 26th Amendment to the Constitution was ratified giving citizens 18 to 21 years of age the right to vote. The chant that highlighted to issue – “Old enough to fight, old enough to vote.”  In 1986, citizens living overseas on military bases were given the right to vote.

The struggle to secure the right to vote continues today over access to polling stations, long lines and limited hours to vote, the security of mail-in ballots, voter identification, accommodations for the disabled, seniors, the homeless, felons, and for minorities—especially in poorer communities.

Polls report political Independents represent between 38% – 42% of voters. There are more Independents than Republicans. But this is misleading. According to a Pew study, most so-called, Independents lean toward one of the two major parties. Only 7% of Independents do not express a partisan leaning.

The good news, in the Pew survey, for third-parties, is that Independents generally are more negative about political candidates and the two major parties. “About 24% of Democrat leaners and 27% or Republican leaners view both parties unfavorably, as do 37% of those with no partisan leaning.”

The unexplored gold mine of millions of new voters

The real voter gold mine, however, is to focus on those who do not vote. Polls tell us 71% of likely voters believe the U.S. is on the wrong track. Yet, in 2016 only 139 million citizens voted out of 250 million citizens of voting age—a 55.7% turnout. That means 111 million eligible voters did not vote. The U.S. ranks 31 out of 35 developed countries in voter turnout.

Pew reports a more acute concern; nearly 51 million citizens of voting age, nearly one-in-four eligible to vote, had not registered. Survey studies attribute this apathy to it being too hard to register (i.e. it requires work and time); a lack of a college degree; the two major parties so dominating the political landscape that voting is fruitless; and, there are so many elections in the U.S. that voters are suffering burnout. Poor excuses for a person remaining irrelevant.

Can anything be done?

It is hard to imagine in the era of Big Data, there have not been numerous studies of why over a hundred million voters are disengaged? The Knight Foundation’s recent study, The 100 Million Project, supplies much of the missing information. It is a massive study surveying 12,000 chronic non-voters nationally and in 10 swing states. It is a study that anyone interested in changing the direction of the country must-read. As for third-parties, understanding the study opens the door to future growth. We all know in 2016, Hillary Clinton received 66 million votes, Trump received 63 million. The study views the election differently: Trump received 27. 3% of the popular vote, Clinton 28.5%, and those not voting received 41.3%.

The extraordinary content of the study will be discussed in a later article. Suffice it to say, however, there are such a countless number of votes available, anyone interested in changing the course of the nation must find ways to engage the disengaged voter.