Cable Reporters Should Register as Lobbyists 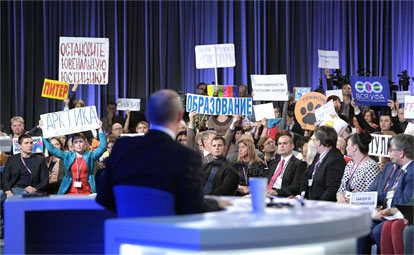 Present day media cares little about democracy, facts or fairness. Media will do “…whatever is necessary to make the electorate vote the way [they] want them to. They’re [the electorate] just the masses – a means to an end.” It is no longer possible for the average person listening to “news” to determine what is true. The only common denominator is that media uses the talking points of their favored political party.

The hosts of “news and opinion” shows bounce from fact, to opinion with some verifiable facts, to non-verifiable opinions, to outright propaganda.

Verifying this conclusion can be done in several ways!

Read “AllSides” on how to spot the eleven types of media bias, e.g. spin, unsubstantiated claims, sensationalism, etc. It also gives examples of each type of bias and the words reflecting it, e.g. dodged, mocked, dangerous, chaotic.

Or just listen to the biased terms describing candidates. One “reporter” described the presidential candidates as one “normal” and one “abnormal.”

Examples of “shading the facts” could go for hundreds of pages.  A press scholar notes that cable channels “are building their networks on outrage.” He concludes “…it’s increasingly rare to find independent voices providing news in a dispassionate way. It just doesn’t fit into the business model…”

It goes beyond talking points; the DNC colluded with CNN in devising questions…to be asked of Mr. Trump in an upcoming… television interview.

It is generally believed that media organizations are exempt from the reporting requirements of the Lobbying Disclosure Act of 1995 (“LDA”) since their purpose is to gather and disseminate news and information to the public.

This may have been a correct conclusion in 1995 when these organizations functioned as quality news organizations, operating under strict ethical standards of truthfulness, accuracy, independence, balance, fairness and accountability.

Can such media bias be considered lobbying? Unless exempt, federal law designates a person having two contacts with government officials and spending twenty percent of their time (including research and background needed) advocating for or against federal legislation, regulations, executive orders or nominees, to be lobbying. These media personalities, including staff, likely meet the twenty percent threshold through regular communications with government officials, to coordinate their message in support of the policies being advocated by their government allies.

The LDA exemption for “media organizations” is for gathering and disseminating news and information to the public. This is where the meaning of words matters.

“News” is a report of recent events or previously unknown information.

“Information” is the communication of knowledge or intelligence obtained from an investigation or study.

Professional journalists follow the Society of Professional Journalists’ Code of Ethics. The code has four principles: Seek Truth and Report it, Minimize Harm, Act Independently, and be Accountable and Transparent.

Media personalities are sensational, emotional, big on conclusions but extremely short on transparency, accountability and verification. Properly characterized these personalities produce “Advocacy Journalism,” a genre of journalism that “intentionally and transparently adopts a non-objective viewpoint, usually for some social or political purpose.

The “media organizations” that are clearly exempt from the LDA are those that follow the classic tenants of journalism, i.e. straightforward presentation of accurate facts, minimal interpretation, and avoidance of overt bias. Both sides of the story are fairly represented.

By not following the journalist code of ethics, this advocacy journalism is not gathering or disseminating news or information for the public which is required for the LDA exemption to apply. Rather they are advocating, with their political supporters, for a specific action to be taken in support of, or, against a government policy.

Requiring these advocacy journalists to register as lobbyists does not restrict their free speech; it merely requires that they inform the public of the policies they are advocating. Democracy demands an educated electorate, not a manipulated electorate.

Getting the truth is very difficult since those in media have a propensity to manipulate us for their purposes. Democracy cannot withstand citizens being fed propaganda, mistruths, half-truths and down-right lies.

An example of media as a political advocate is its continuous allegations that Russia helped the President win his 2016 election. The President was exonerated by the special counsel; acquitted in the impeachment trial by the Senate and still the media continues to push its propaganda that Russia helped elect him president. The media knew the Steele dossier given to the FISA court was false but it continued to push it as if true. The media pushes a new investigation of the president as soon as one investigation ends, without any new facts. This is pure advocacy that is covered by our lobbying laws. The media has sufficient contacts with government officials and spends twenty percent of its time advocating for or against federal policy. This is lobbying; not reporting.

How do we deal with a media that seeks to implement its policy objectives through unfair and many times false representations to the public?