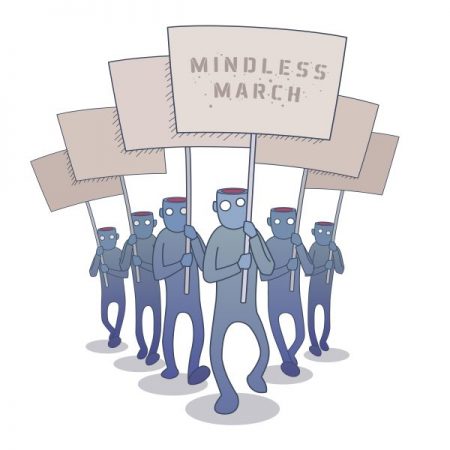 The year is 1433. The last of the ships from the seven voyages of China’s Treasure Fleet, those massive ships that displayed the might of China to all the kingdoms of the Indian Ocean, returned home to political division. The Mandarins (bureaucrats) and the eunuchs (the navy and merchant class allies) were in political battles. When the emperor who funded the great expeditions dies, his son, with the support of the Mandarins and fear of the merchant class, orders the fleet controlled by the navy, be grounded, the records destroyed and overseas trade forbidden.

Scholars posit the Mandarins burned the ships because the political elites were afraid of free trade. With the records destroyed, no one knows what happened other than China’s leaders, based on fear, made radical political decisions that thrust China into poverty for almost 600 years.

Listening to the Democrats’ debate and reading the President’s tweets, one wonders if our “leaders” are using fear to support equally, long-lasting, radical political decisions?

Harris, Sanders and Warren want to ban all oil and gas fracking. Senators Warren and Sanders want to forgive all student indebtedness when these loans constitute 45% of the financial assets held by the federal government.  All of them want to provide a lot of free things, while few realize each citizen’s share of the national debt today is $67,000 and rising quickly.

It’s not only Democrats on the edge of the abyss. President Trump imposes high tariffs on almost everything the U.S. buys from China, and China retaliates. Then he usurps Congress’ power to appropriate by transferring military funds to fulfill his campaign promise of a “wall”,  while alluding he can stop certain wars immediately by using nuclear weapons.

And if those radical proposals are not enough, Senator Sanders, proposes spending  $16.3 trillion to fight climate change by eliminating all fossil fuels by 2050.

Eighty percent of the energy used by the U.S. is fossil fuels. These fuels heat homes, power vehicles, keep factories running and lights on. Petrochemicals stripped from the petroleum are used in most manufacturing operations, including pharmaceuticals and consumer goods.

Of the available non-fossil fuel energy sources, some environmentalists don’t like nuclear for its waste; hydropower kills fish; wind takes up too much land; kills wildlife, wastes water; causes noise pollution; and solar needs too much land, and toxic materials are used in manufacturing the panels.

As a reality check, our nation is $22 trillion in debt and on our way to $29 trillion by the end of the Trump administration. Just to replace the electric grid is $5 trillion. Moreover, the oil and gas industry is over 1,500 firms on stock exchanges, and together they are at least  Markala worth a whopping $4.65 trillion. Any federal effort to regulate the fossil fuel industry out of business would be met with massive “taking claims” under the Constitution’s Fifth Amendment which mandates “just compensation,” even for regulatory takings. This type of regulatory taking has already been held unconstitutional by the U.S. Supreme Court in the “Regional Rail Reorganization Act Cases”. Simply, our government could owe tens of trillions of dollars in compensation for the” takings”. These costs would be in addition to Sander’s $16.3 trillion proposal.

Appropriating money to replace the fossil fuel industry is only the beginning. Securing the environmental permits for tens of thousands of replacement projects is highly unlikely without comprehensive regulatory reform. There is simply no existing legal structure that allows for removing existing energy infrastructure and constructing replacement infrastructure in the same time period. So, if a coordinated plan is not possible, the planet will be gone if the ten-year predication is correct?

The climate proposals put the future stability of the nation in question. Having the federal government demolish the nation’s energy infrastructure and rebuild it in a short period of time, is certainly a “stunning campaign promise”.  The lives of Americans are littered with high costs, half-assed, campaign promises. We haven’t been able to keep our doctor. The tax bill did not pay for itself. The wars are still continuing and soldiers still dying. The debt is growing; not being paid off in nine years as promised and on and on. Now, using fear, politicians propose to intentionally destroy a viable industry that keeps the nation working, innovating and wealthy and replace it with promises of a perfect future.

As a cautionary tale, remember 1433! If we don’t remember it, we may be handing global dominance back to China, as we descend into poverty.

This article was initially published in The Hill on September 16, 2019.