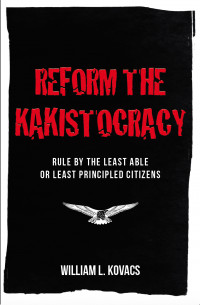 Reform the Kakistocracy: Rule by the Least Able or Least Principled Citizens defines the term ‘kakistrocracy’ as being “what our government has become, a government-controlled by “leaders” who are the least able or least principled citizens.” Keeping this definition in mind is intrinsic to understanding the driving force of a thought-provoking treatise dedicated to “the Dutiful Cog”, defined as “that person who keeps society running by getting up every day and going to work, taking care of family, paying taxes, contributing to community, and being continuously loyal to the nation.”

William L. Kovacs believes the tenacity of these ‘cogs’ will prevail over political battles and corruption. Reform the Kakistocracy offers the ‘how to’ manual for this process.

In some ways, this theory is akin to The Peter Principle, but without qualified people. In a Kakistocracy, the cream doesn’t rise to the top until it sours, but is placed at the top irregardless of its strengths and abilities.

Chapters provide both a political and social history of the raise of this too-complex national control system and comments on who runs it, how people respond to it, and how it’s rewritten the US Constitution for its own special interests and gain.

It questions: “For whom did we form a government?” We, the people seem to have left the original equation. Politicians will be the least likely readers of a book which lambastes this system. But, the Dutiful Cog will.

This isn’t a general treatise, but offers specifics on the methods and approaches that least-qualified leaders use to circumvent political process, freedoms, and moral and ethical ideals of behavior.

Reform the Kakistocracy isn’t just a condemnation of the system, or a history of how it came to be. Chapters offer “A Few Modest Proposals for Restructuring” which range from reversing regulatory complexity to the federal government divesting itself of unnecessary assets and returning control of lands to states that ceded them to the federal government.

The proof of the success of this treatise lies in these and other specifics. This is where Kovacs excels, placing his work head and shoulders above the usual approach to critiquing the federal government and its processes.

By making its examples specific and linked to daily life and familiar political process and results, Reform the Kakistocracy provides Dutiful Cogs with more than a bit of hope for a more effective future, including a blueprint for enacting real change.

From income tax revision to citizen management of the Kakistocracy, this is a thought-provoking, action-oriented blend of history, philosophical, and political inspection. It is highly recommended reading for readers who would understand the process of change and how America got to where it is today, in the first place.

We’re standing at a fork in the road and hold the opportunity to remake the nation using a smaller government structure as a blueprint for success. All that’s needed to complete the formula for success is action, understanding, and more books like Reform the Kakistocracy.